Automotive research specialists, JD Powers, recently found Suzuki to be one of the best quality mass-market brands in the UK, when measured by the number of problems that customers have experienced during the first three years of ownership.
The tests show Suzuki quality, after three years of use, was rated at 30% better than the industry average. This, when combined with high levels of sales and service satisfaction, makes Suzuki one of the most rewarding brands to own.

The JD Power Vehicle Dependability study is considered one of the most comprehensive quality studies of its kind. Apart from asking owners for a general assessment of the quality of the vehicle, it studies 177 specific areas in each vehicle.

These include engine and transmission, driving experience, paint, panel fit and finish, seats, heating and ventilation, in-car entertainment and the general quality of the interior after three years of use.
The UK JD Power report mirrors Suzuki’s internal customer satisfaction ratings in South Africa.

Since its official local launch in 2008, Suzuki has seen its customer satisfaction ratings track positive to its growth in market share, with a high point recorded in 2014, when it was officially recognised as the second-fastest growing brand in the country. 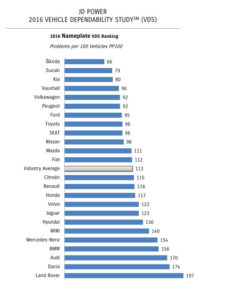 Over the past two years, Suzuki has also increased its dealer footprint in South Africa by doubling its dealer network from 23 in 2014 to 47 dealers by the end of 2016, including new dealerships in Lesotho and Swaziland.
“Each one of our passenger models and SUVs has a loyal following, but in the lead is the Suzuki Swift, our most popular passenger vehicle in South Africa,” says André Venter, divisional manager for sales and marketing at Suzuki Auto South Africa. “The Swift is a best seller with combined sales of over five million units across the globe.”
The Swift has amassed over 60 awards in recent years, including quality awards across Europe and consumer choice accolades in Europe, Asia and South Africa.

In South Africa, the Swift was named in several large consumer choice and magazine awards, alongside the Celerio, Vitara, Ciaz and Ertiga.
#‎SuzukiNUR‬ ‪#‎WayOfLife